We got an early Christmas present this morning, and we're pretty excited about it. We found out that First Frost, our winter persimmon ale, is a finalist in the annual Good Food Awards competition!

The competition judged beer (and cheese, and chocolate, and coffee, and confections, etc.) from 49 states across the country. From a record number of entrants, the judges chose sixteen beers—including ours! We're honored to be the lone Southeastern representative in a category dominated by West Coast breweries.

Around these parts, we've always known First Frost was a special one. We're just happy that the national team of judges thought so too. It's especially awesome to be recognized for a beer that uses an uncommon yet quintessentially Southern ingredient. (In case you haven't noticed, that's what we're all about.) 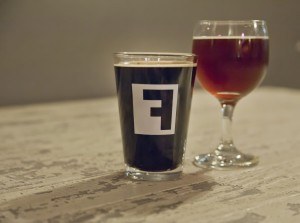 Winners won't be announced until January, but we're going to celebrate now. And it won't be long before First Frost 2013 arrives! This year's batch uses 550 pounds of community-foraged and farmed persimmons and will be released just before Christmas. Look out for a press release with details on how and where to buy First Frost 2013.