Two days ago, I got a great but unexpected voicemail from Durham artist Libby Lynn. Turns out we have a mutual friend, Candice (check out Candice's esty site here).

Libby had a piece of art that she wanted to donate, and Candice recommended that she give it to Fullsteam. Now this isn't any ordinary work of art...at least not to Durhamites and those of us who love the Bull City. It's a 3x4 foot acrylic, oil, and wax rendering of the iconic "Durham, Renowned the World Around" sign chronicled by Gary Kueber at Endangered Durham (this is a very good read with great commentary and impassioned opinion, so I'm going to add another link).

"In 1913, the Durham Traction Co. (later Duke Power) offered to pay to erect a large electric sign lauding Durham, as a gesture of thanks to downtown merchants who had purchased electric lights. The Commercial Club (later the Chamber of Commerce) sponsored a contest to decide the slogan. The winning entry, from WW Weaver and JE Banning was "Durham: Renowned the World Around."
The sign was erected on a moonlight night on December 15th, 1913. In addition to the slogan, it read "Health, Wealth, Progress, Success" around the circumference. The sign was 31 1/2 feet wide and topped by a "10 foot sphere". It required 1200 bulbs to operate. It was illuminated to a crowd of either "hundreds" or "thousands"."

Libby expresses the optimism of the sign especially well on her blog. Here's an excerpt:

"I love the dual naivety and hubris of the sign, and the art nouveau lettering and flourishes remind me of what Durham still wants so desperately to be: A real city with a thriving economy that equally welcomes cutting edge industry and local craft and creativity. Although our much beloved city has made a slew of smart improvements over the last decade, it’s still half-frozen in the early 19th century."

This is a great gift to Fullsteam. Our plan is to place it in the front beer garden under a large communal table -- a not-so-subtle reminder that our on-premises mission is to celebrate and promote Durham's "health, wealth, progress, and success." Perhaps our own naivety and hubris, nearly a century later. 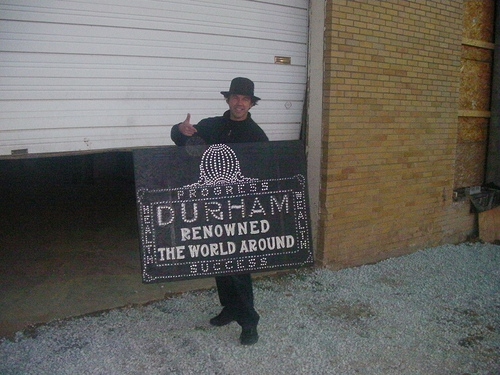 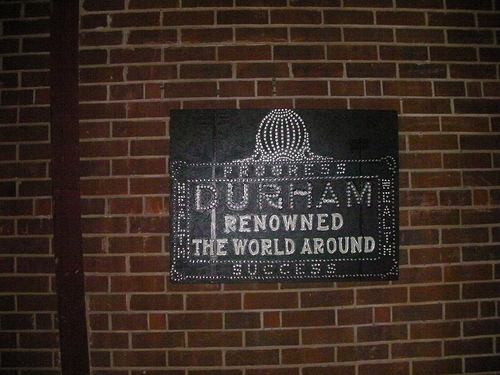